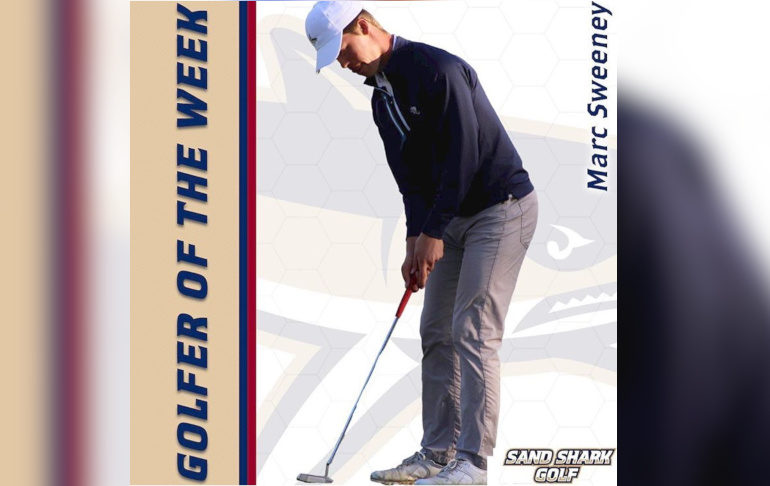 Marc Sweeney’s golf game started to take off at university last season and the Saskatoon product has continued to excel in his junior year.

Sweeney, 20, took up the game of golf with the help of his grandfather at Saskatoon’s Greenbryre Golf and Country Club when he was young. His father also liked to play the game and visit courses with Sweeney as he juggled the game along with hockey. A self described “late bloomer” Sweeney didn’t start playing competitive tournaments until he was about 13 years old. He played in three Saskatchewan Junior Men’s Championships through out his high school days. Once graduation neared Sweeney started reaching out to college coaches but an email from the coach at the University of South Carolina Beaufort (USCB) changed his collegiate golf plans.

“It’s warm, the golf courses around here are like nothing I’ve ever seen before, it’s beautiful,” he told Golf Saskatchewan of the Bluffton, South Carolina based school. “My mom and I visited here one January and got to play our home course, Oldfield, and it was beautiful. Ever since then I thought it’s going to be tough to pass up an area like this. The calibre of golf team we have, we’re pretty solid this year and we have been for the three years I’ve been here. It’s been a no brainer to come here.”

Sweeney came close to winning a tournament last year, he lost in a sudden death playoff. This season he always seems to be hovering near the top of the leaderboard including a recent second place finish at the Skyhawk Invitational in Pine Mountain, Georgia. He also has a fifth, seventh, and 10th place showing this season. Sweeney said his development is based on his experience and playing better fields.

“I think the experience has a lot to do with it. In the first couple years I was just looking to make the team, we have nine guys and five travel,” he explained.

“In the first couple years I was just looking to crack the line up and travel, fortunately enough I’ve been able to crack it most of the time. I’ve been playing against guys that are really good and you have to make sure your game is good as well. Experience is one thing for sure and getting more confidence. I feel my game has improved a lot since I’ve been down here.”

For his second-place effort at the Skyhawk, Sweeney was awarded the Sun Country Conference men’s golfer of the week. He shot a three-round total of 217 thanks to the help of an eagle and 12 birdies. Sweeney’s total helped his USCB team finish second overall as well. He said the acknowledgment was nice to receive.

“I’ve had a couple tournaments I’ve finished pretty well but it was Wednesday morning I got the notification. I have never had that honour yet but hopefully there is more to come in the future for sure. It was nice,” he said.

The Sandsharks are currently ranked in the top-10 in the nation in the National Association of Intercollegiate Athletics (NAIA). The school competes in three NCAA Div. 1 tournaments a year and has a team win earlier this season. The group will have a break for about three weeks before they head to Dalton, Georgia for a tournament. The conference championship is slated for Miami near the end of April and the national championships, which Sweeney expects the Sandsharks to be invited to will be in Mesa, Arizona in May. He said the travel is extensive but seeing different parts of America has been a highlight for him.

“We get to play some sweet tracks and we definitely log some hours in the van. It’s good though, I like it. I’ve seen so many places I’d never thought I’d travel to and play some of the courses we play, it’s pretty special,” he said.

Sweeney has one more year of collegiate golf after this season. Once he’s finished school next year he will have a degree in accounting. This summer he has a summer position lined up with FCC back in Saskatchewan. He expects to play Order of Merit events including the Men’s Amateur Championship in July at the Saskatoon Golf and Country Club. He said the degree is a healthy back up plan but continuing to play golf could take precedent immediately following graduation.

“I’ve done so much work already I think it would be a waste if I didn’t at least try to play pro. Maybe I will give it a try for a few years. I have some good connections I’ve made here in South Carolina that would allow me to pursue that dream I think,” Sweeney said.

Sweeney spoke with Golf Saskatchewan’s Clark Stork Thursday about the award and his overall experiences with the sport.