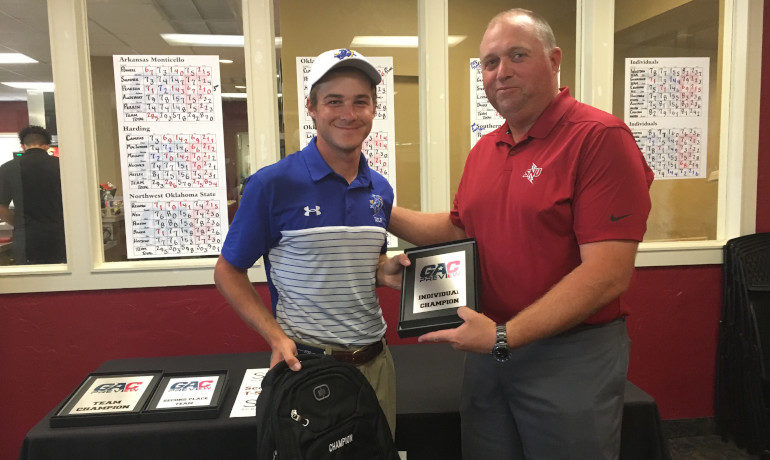 It was an impressive opening week for some of Saskatchewan’s student-athletes playing golf at US colleges.

Saskatoon’s Roman Timmerman made the biggest impression winning his first collegiate championship in the opening event of the season, the GAC Preview. Timmerman has been close to winning at the NCAA Div. II level over his first couple years at Southern Arkansas University (SAU), but he finally succeeded at the Lake Hefner Golf Course in Oklahoma City on Tuesday.

“It feels awesome,” he told Golf Saskatchewan on Wednesday. “I knew I was capable of doing it but, you never know until you do it. To get the monkey off my back, I’ve been putting a lot of work in lately, so it feels really good.”

Timmerman finished the 54-hole event with a score of 210 (68, 68, 70) and was tied with Dakota Clark of Oklahoma Baptist at 10-under par. The Riverside Country Club member ended up securing the win in a playoff. He said not only was winning a memorable moment but getting the victory early in the season takes some pressure off going forward.

“It takes a lot of the pressure off for sure,” he said. “My goal coming into this season was to get an individual victory. To do it right off the bat in the first tournament feels great, now I can focus on the team. We have a great team this year so hopefully we can continue with this momentum.”

As a team the Muleriders won the event, their second straight at the Hefner course. That’s also the school’s fourth win in the last calendar year under coach Ben Sanders. The overall score of 22-under, 842 is the second lowest ever in the university’s history. Timmerman’s tournament score was the fourth lowest in the school’s Div. II era dating back to 1995. Poised to have a big year along with Yorkton’s Kade Johnson, Timmerman said the success is exciting to be a part of.

“I don’t our program has seen this success before so to be a part of it feels awesome and to share it with Kade is pretty cool,” Timmerman said.

Next up for the Muleriders is the Northeastern State Classic on Sept. 16 and 17.

The Royal Regina Golf Club member finished in a tie for fifth after shooting rounds of 75 and 79 at the IWU Fall Invitational. The fifth-place finish follows a tie for sixth in Kydd’s first tournament of the season on Aug. 30.

The Wildcats, a school governed by the National Association of Intercollegiate Athletics (NAIA), travel to Peru, Indiana for the Battle at the Rock on Sept. 16 and 17.

Schmidt shot a two-round total of 160 to finish third in the Argo Invitational in Great Falls, Mont. The Royal Regina member’s strong showing helped the Warriors finish second in the team competition.

Schmidt and the Warriors will travel to Helena, Mont. for the Fighting Saints Invitational on Sept. 23 and 24 for their next event.