Regina golfer gets call to hall 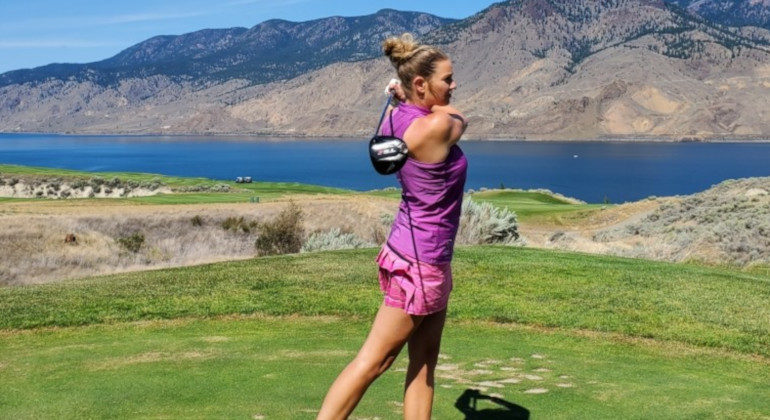 Shannon McGeady is a 2019 Regina Sports Hall of Fame inductee.

Regina born golfer Shannon McGeady is being enshrined in the Queen City’s Sports Hall of Fame.

The 2007 provincial amateur champion and current professional at Tobiano Golf Course in Kamloops, B.C. is one of six 2019 inductees into the Hall of Fame. McGeady said her career path in the sport got started when her family built a house near the Wascana Country Club.

“I was a member when I was ten and started playing there with my family,” she explained to Golf Saskatchewan following the announcement. “It was a great place, they would pretty much drop me off at the golf course on their way to work and pick me up on their way home, it was a pretty good way to spend a summer as a kid.”

McGeady didn’t start playing competitively until her mid to late teens. When she was about 15 years old she started competing on the junior Saskatchewan circuit and the provincial championships. She won three Regina high school girl’s championships during her days at Leboldus High School. She had a chance to attend Marshall University in the United States following graduation but made the choice to stay home, something McGeady still stands by.

McGeady went on to post-secondary education in Lethbridge and studied under the Professional Golf Management (PGM) program in hopes to pursue a career in the industry. In 2007, after four consecutive Regina women’s championships McGeady claimed the Saskatchewan amateur title.

“It was surreal moment, I was going to school at the time taking the PGM program to be a professional and it was my last summer before I finished school so I knew it would be my last summer of amateur golf if I wanted to pursue the professional route,” she explained. “It was a pretty cool experience to know it was my last big summer as an amateur and I was able to play well enough in Swift Current that year to get the win so that was pretty cool.”

The Regina Sports Hall of Fame made the induction announcement in early August. Her credentials include one junior national experience and six Canadian Amateur Championship appearances. Long-time Rider Neal Hughes, famed University of Regina basketball coach James Hillis and athletics great Georgette Reed are among the class. McGeady said when she received the phone call with the news it was hard to believe.

“At first I thought it was a joke,” she laughed. “I didn’t expect it and when I realized it wasn’t I was so shocked I didn’t know what to say. I was honoured and grateful and it still feels surreal. It’s weird to think of myself with those other amazing people, I can’t even find words for it.”

McGeady and the rest of the 2019 class will be enshrined at a gala event in Regina on Oct. 12 at Evraz Place.

Looking back, McGeady knows this honour wouldn’t have been possible without positive support from her family and the Regina golf community, especially the Wascana. She hopes future junior golfers continue to grow and excel at the game.

“Kids at a young age just want to have that, I go to a golf course and I have fun,” she said. “As they get older they will want to play more and hit balls more. It’s all about parents bringing them to the course and creating a positive environment where they get to run around outside with their friends or mom and dad and as they get older they want to do what dad is doing or see what mom is doing. They will then create it on their own as to I want to play this, I want to compete, I want to be this person.”

McGeady is optimistic with the way women’s golf is headed, she said the sport is much more popular now than it was when she was young growing up in Saskatchewan. She credits Brooke Henderson for a large part of the growth but also the other five female pros in B.C. as well as the women she grew up with in Saskatchewan.

“I’m just grateful and honoured about the induction, it’s very surreal. Golf in Saskatchewan shaped and molded me for the profession that I’ve chosen,” she concluded.

McGeady spoke with Golf Saskatchewan’s Clark Stork after the announcement.