La Ronge's Dade Bernatchez is one of the youngest players in the MJT National Championship field. Photo-Devin Bernatchez

Day one of the MJT Boston Pizza National Championship is in the books in Kissimmee, Florida.

Of the 14 Saskatchewan competitors Saskatoon’s Keighton McNab is sitting the best after round one at Reunion Resort. McNab, 20, leads the collegiate division after shooting three-over, 75 on Friday. He is two strokes up on Edmonton’s Dakota Smith for the lead.

In the bantam boy’s division Saskatoon’s Tommy Danielson is right in the hunt. The 14-year-old shot 79 Friday and sits tied for second in the category, just six shots off the leader going into the second of three rounds. Saskatoon’s Max Regier, 14, fired an 84 and is tied for fourth. Derien Herlick of Weyburn is tied for eighth after an opening round score of 88.

Two Saskatoon products are competing in the juvenile boy’s division, Alex Swinnerton and Chase Pochylko. Swinnerton, 15, shot 81 Friday and is in a tie for 17th. Pochylko, also 15-years-old carded an 82, he’s in tie for 18th.

Warman’s Dane Giesbrecht put himself near the top of the top of the peewee boy’s division with an opening round score of 81. He sits in third-place five strokes back of the leader. Buena Vista golfer Elias Haukeness posted an opening round of 96, he’s in ninth place. La Ronge’s Dade Bernatchez (pictured above) is in 10th with a round one score of 97.

Yorkton’s Ella Kozak is sitting in a good spot after day one in the under-15 girl’s category. The Deer Park member shot 79 on Friday putting herself in a tie for second three shots behind the leader, Anna Huang of Vancouver.

Reigning Saskatchewan junior girl’s champion Autumn Neiszner is the lone Saskatchewan competitor in the girls 15 to 18 division. The Regina golfer fired a round of 81 and sits in ninth place. She will try to close the gap on leader Sarah Gallagher who shot 75.

Round two will again be a shotgun start with all players on the tees at 7 a.m. Saskatchewan time. The champions will be crowned after Sunday’s 54th hole. 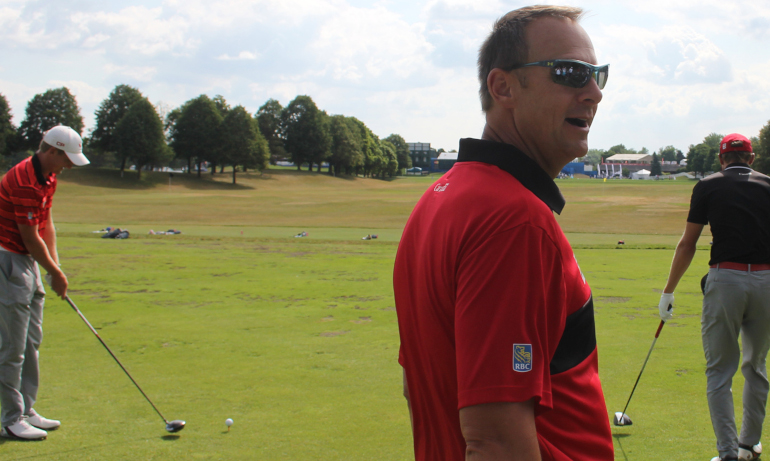 Can you improve your game indoors? Golf Canada’s coach believes so