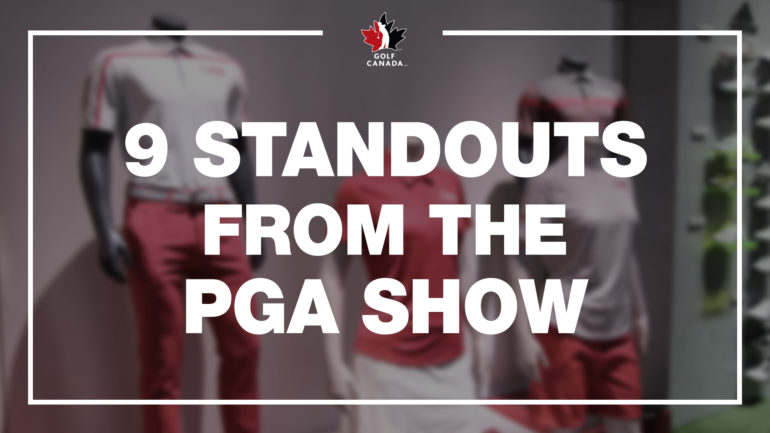 The PGA Merchandise Show in Orlando is one of the most vibrant opportunities for golf industry members to connect in the New Year.

This year’s edition was no different.

Thousands of attendees packed the floor of the Orange County Convention Center – they say there are 10 miles worth of walkable area on the convention floor – and pushed through a windy and cold (by Orlando standards) demo day at Orange County National Golf Center’s 400-yard-in-diameter driving range.

The PGA of Canada put on a spectacular evening, as it does every year, to honour many deserving award winners from the year-that-was in Canadian golf, including a special award in 2020 to the president of Golf Canada, Charlie Beaulieu. 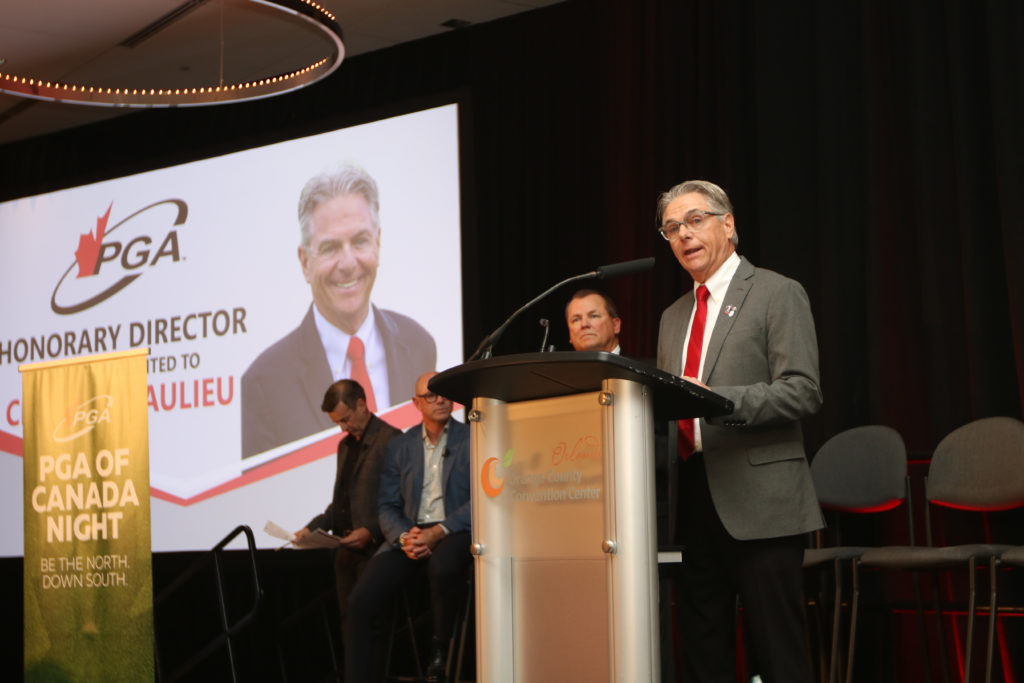 That wasn’t the only Canadian connection at this year’s show, as you’ll see when you read on.

The PGA Show is a unique event, and Golf Canada wants to give you an inside look at the goings on from Florida.

Here are the nine things we’re still thinking about from the 2020 PGA Merchandise Show.

The PGA Show draws attendees and exhibitors from all around the world, but it was great to see some strong Canadian connections in 2020.

Dormie Workshop – founded by some brothers in Nova Scotia – has quickly become the authoritative name in leather goods. Dormie’s headcovers are world class (you can buy yours from Golf Canada’s website) and this year brothers Jeff and Todd Bishop announced they would be expanding Dormie’s line to include golf bags, luggage, glove covers and more. Dormie has also entered into a partnership called “The Collective” with two other hip golf companies, Foray (clothing) and Asher (gloves). 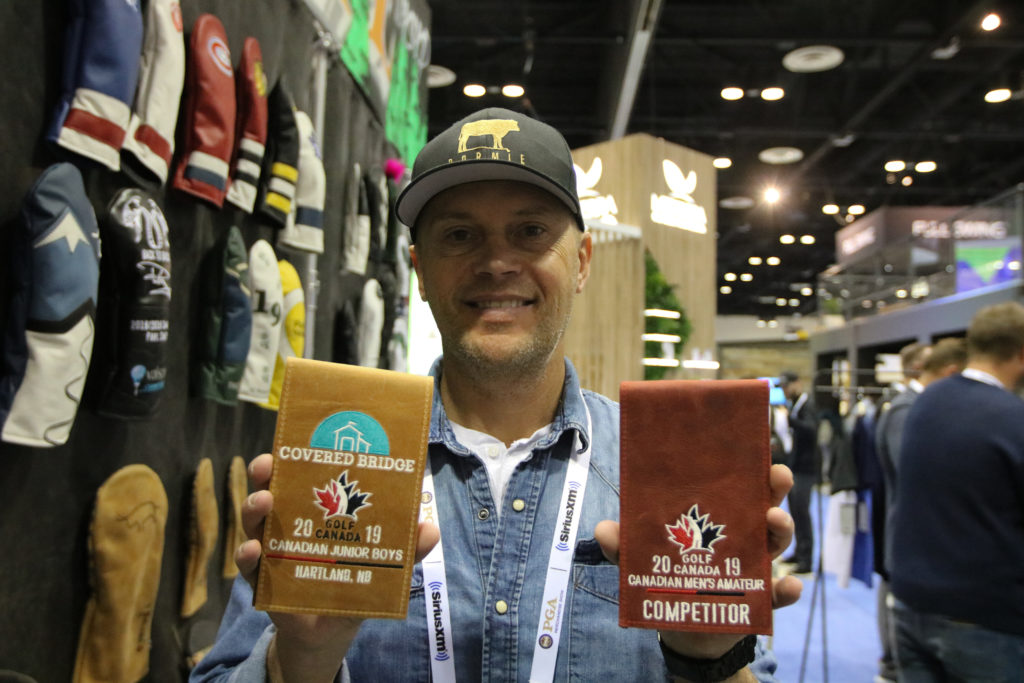 While Dormie is expanding its assets line, 2UNDR remains committed to supporting the assets of the male golfers out there.

The British Columbia-based underwear company has continued its relationship with star Rickie Fowler and its line of performance undergarments have continued to be well received by many on the PGA TOUR as well as on the course and off. 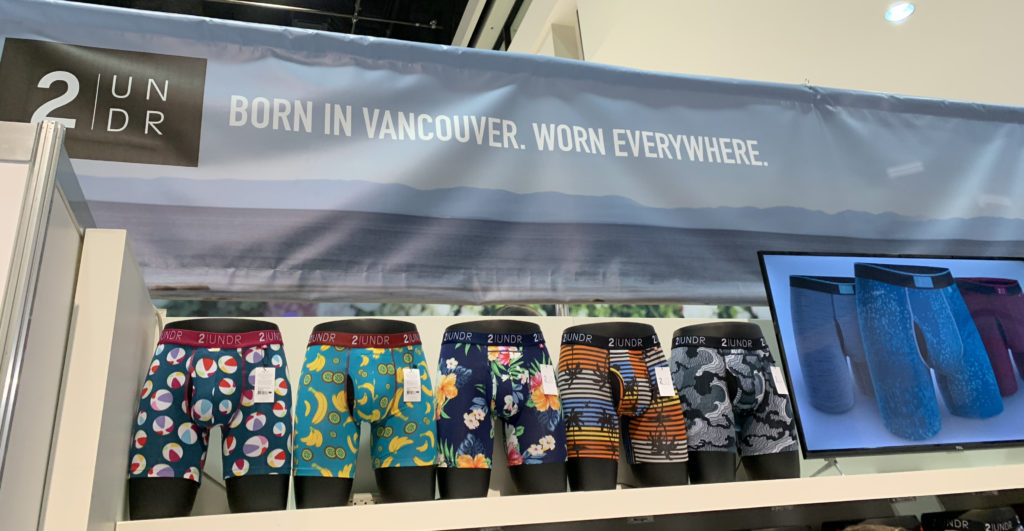 Once you’ve reached legend status in golf you just need one name. Tiger, Jack, Arnie, Rory, Annika… you know exactly who they are.

The same goes for Scotty (Cameron) and (Bob) Vokey.

Vokey, a Canadian Golf Hall of Famer, was on-hand this year to launch the new Vokey SM8 wedges, while Cameron happily showed off his new line called Special Select.

Both the SM8 line of wedges and the Special Select putters are Tour-proven, look amazing, and are perfect for your bags in 2020.

Canadian golf had a banner year in 2019 and as we look ahead to 2020, our stars will not only be playing well, but looking good too.

During the PGA Show Levelwear announced it had re-signed some of Canada’s biggest stars in golf including Corey Conners, Michael Gligic, and Taylor Pendrith. The company, based just north of Toronto, had re-signed Adam Hadwin – Canada’s top-ranked male golfer – last year, and its new gear for men and women was on display in Orlando.

It’s likely that Conners and Hadwin will be representing Canada at the Olympics later this summer, and adidas had in its booth the uniforms that Team USA and Team Canada would be wearing on the golf course in Tokyo – with some solid red-and-white accents (of course). 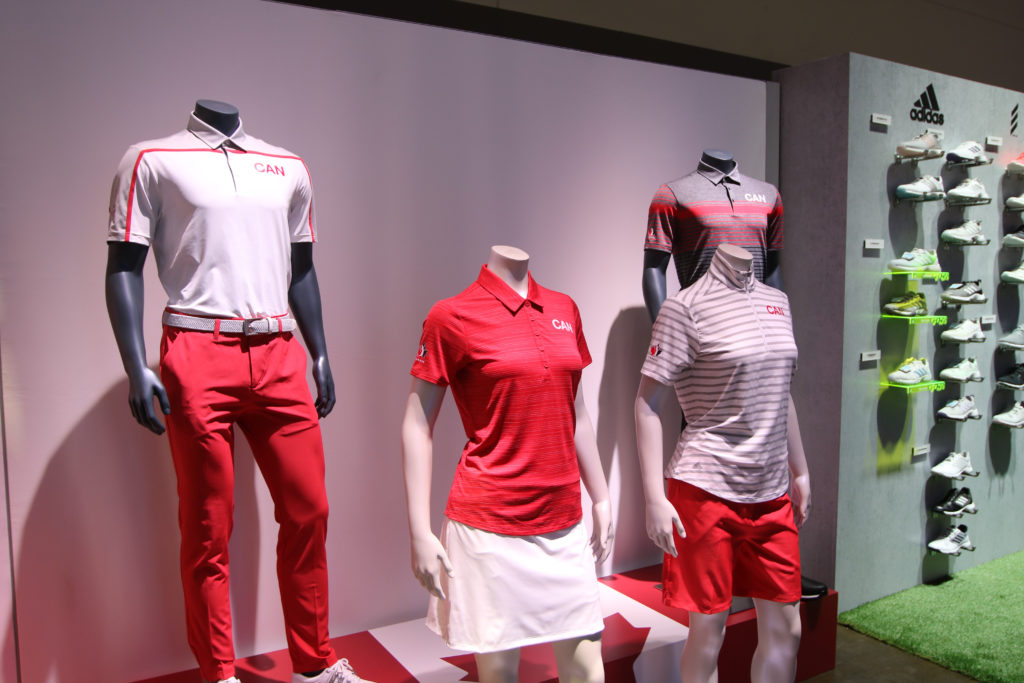 While 2020 will mark the third year Canada has legalized cannabis, it’s not nationally legal across the United States. However, 2020 was a big year at the PGA Show for vendors who produce a variety of CBD products aimed at calming the mind and body of golfers, as many states are starting to legalize it.

Cannabidiol (CBD) is a product derived from cannabis but doesn’t cause a ‘high’ like another cannabinoid, THC. Instead, CBD oil – when mixed in chewing gum or edibles has the potential to relax its chewer. When combined with other oils or muscle creams, it provides a new kind of soothing feeling.

While not for everybody, the lines at each of the CBD booths showed that people were at least interested in trying something different.

And, since both CBD and THC are fully legal across Canada, it won’t be the only time interest in the products will be sparked.

You’re supposed to have fun playing golf. While there were plenty of products at the PGA Show that promoted this, there were two that really stood out.

The first were pushcarts from Walker Trolleys. Brad Payne, who used to work as a designer for Apple, designed the cart. It made its debut at the PGA Show, and it’s a combination of sleek and practical, with whitewall tires, a polished aluminum frame, and a leather handle – plus a customizable canvas storage system. Look for them at some premium golf facilities across North America this summer.

Many golfers – while they’re walking or riding – like to listen to music on the course these days. But Bushnell has invented a new product for 2020 that combines the world of tunes with the world of tight approaches. The Bushnell Wingman is a Bluetooth speaker that doubles as a GPS yardage device. So while you’re rocking out to Rush or The Tragically Hip this summer, you’ll only be interrupted by a voice telling you how far it is to the front, middle, or back of the green you’re staring down.

6. DOING OUR PART FOR THE PLANET

A big trend not just in golf but also in the worlds of retail, technology, and more, is encouraging companies and the general public to be more environmentally friendly.

At the PGA Show this year, for the first time, there were shirts and shoes made out of recycled plastic water bottles. That’s just one example of clothing companies making a concerted effort to try to be more environmentally conscious.

Canadian shaft maker ACCRA also announced at the PGA Show it would be launching a new shaft called the Eco-Satin (a version of its i-Series shaft). Eco-Satin uses fewer chemicals on the finish and nearly 40 litres less water than normal. 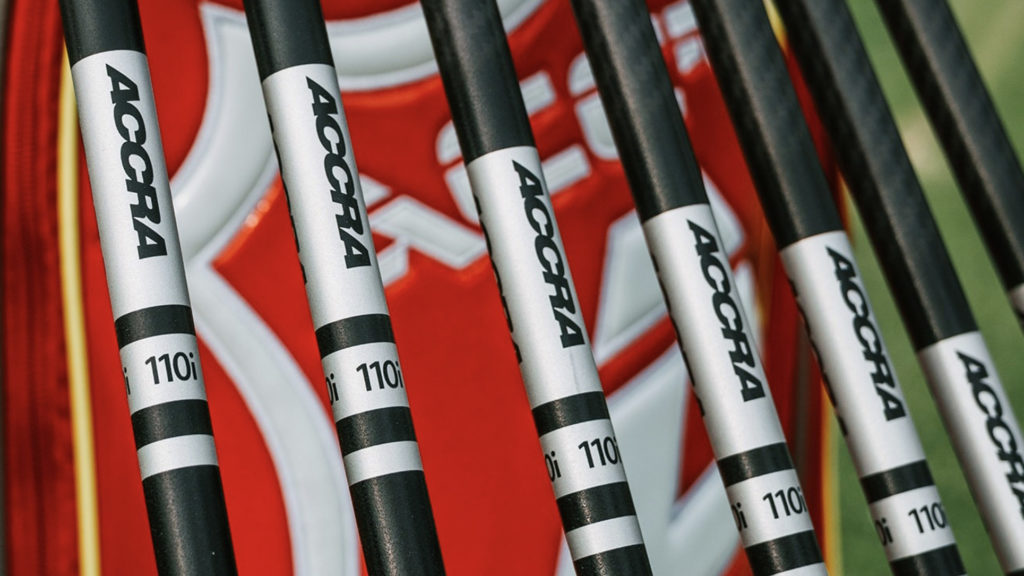 One of the largest – and most impressive – booths on the PGA Show floor in 2020 was that of Foresight. Foresight has made golf launch monitors and HD simulators for nearly a decade. The San Diego-based company now has more than 10,000 of their products in retailers, courses, homes, and driving ranges across North America. 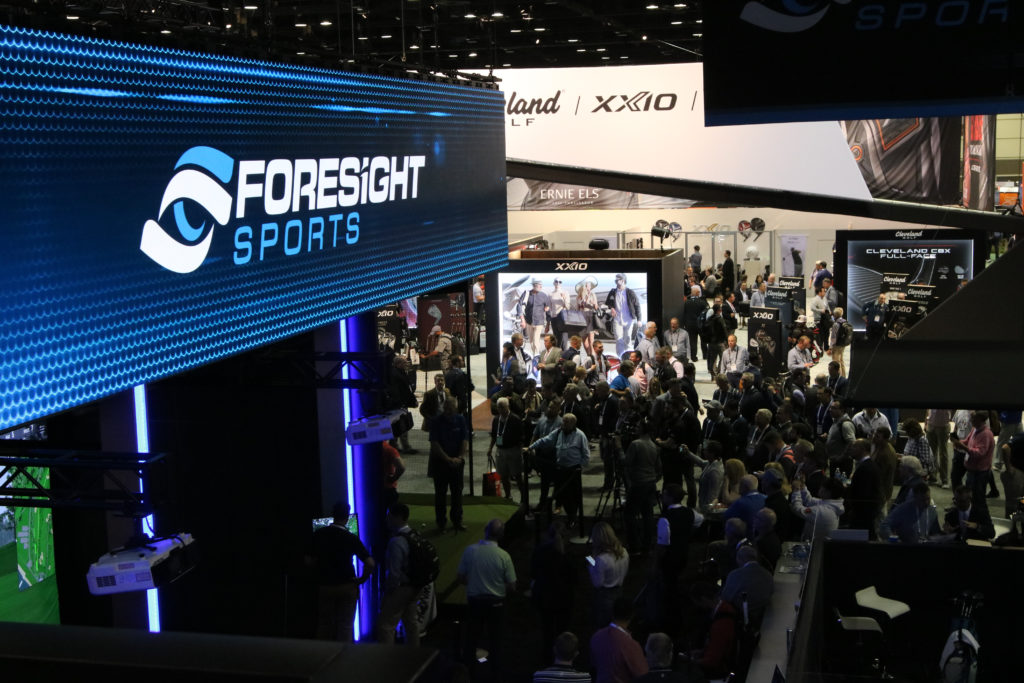 In 2020 it was focused on launching the GCHawk, which is actually an overhead-mounted launch monitor (versus setting the machine on the ground). The GCHawk captures data from every club in the bag, and no matter if you’re a lefty or righty, you don’t need to set yourself up any differently.

It’s hard to beat the Foresight digital experience, and seeing it in action at the PGA Show was truly impressive.

8. SHOES FROM THE SHOW

There is only one part of a golfer’s gear that is used on every single shot plus every single step during a round – his or her shoes.

This year at the PGA Show we saw copious kicks, from modern to classic. If they were tech-first or comfort-first, all the shoes we saw were designed for golfers in mind and to make every swing and every step even more comfortable.

A couple of shoes that really stood out were from FootJoy. The company literally has ‘foot’ in the name – so you know every year you’ll see some solid options. New for 2020 is the Tour X, a shoe inspired by FJ’s vast network of Tour players. You’ll also see an expansion of its FJ Flex line (including another custom design coming for the RBC Canadian Open…) including the Coastal and LE1 – perfect for on-course or off.

Also jumping out at us for 2020 given their fresh design concepts were the Ignite PWRADAPT CAGED shoe from Puma – with a focus on locked-in stability and comfort – and adidas’ new CODECHAOS line, which features several spikeless models with style inspired by running shoes. 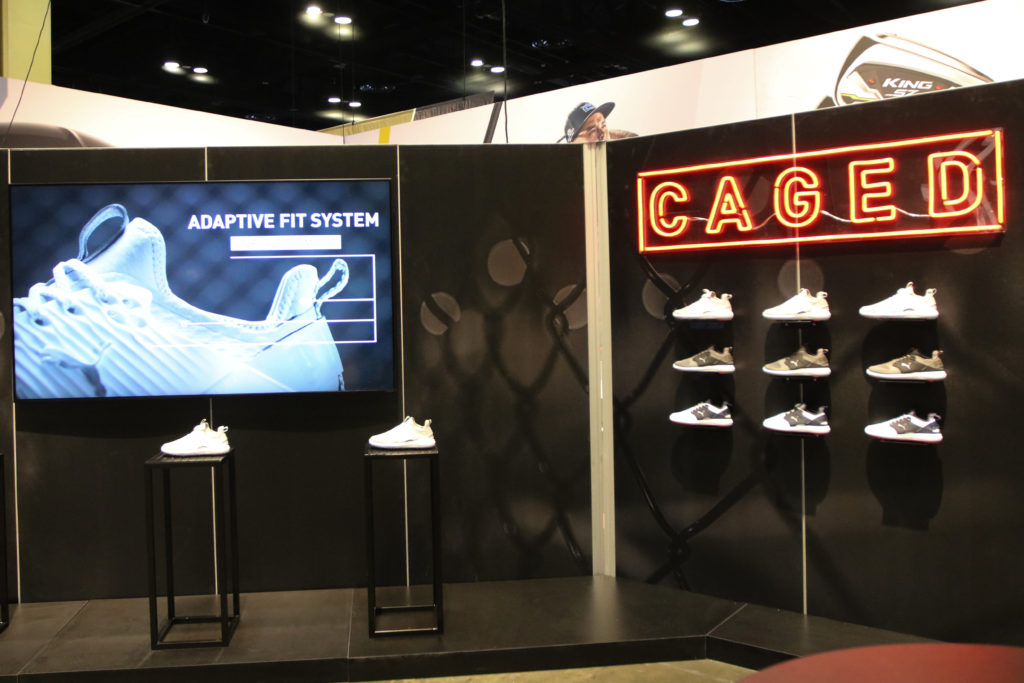 One thing for certain whenever thousands of golfers and golf industry professionals get together – it’s clear the game has gone global.

Many of the companies above have headquarters in the U.S., with key offices across Canada, Europe, and into Asia. You could sit at a table with people from five different countries, and three or four different languages could be spoken. The PGA of America put on plenty of informative discussions during the show that tapped into global knowledge, while representatives from the PGA Tour, LPGA Tour, European Tour, Golf Canada, the PGA of Canada, and the USGA – amongst many others – were all mixing it up during the week.

The USGA, in particular, had a special new announcement for 2020. Just weeks prior to the show it, along with the R&A and Golf Canada, brought forth the World Handicap System (WHS), and it was a hot topic at the PGA Show. Industry professionals learned more about how they can best work with their members and public players this year and moving forward. The WHS provides all golfers a consistent measure of playing ability (more here).

Just like many new and innovated pieces of technology at the PGA Show, the World Handicap System is built to make golf more fun. 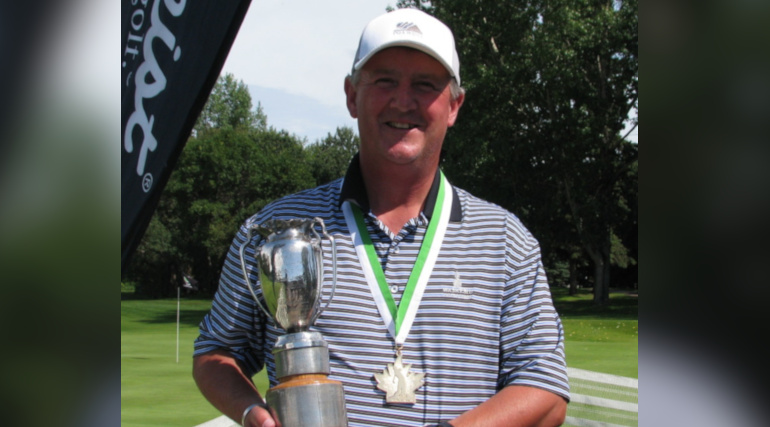 Martin ‘Ring’s in new year with call to Hall